The examined information about Italian city named Rome in our time clarifies the fact that it first appeared after the Normans rule around thirteenth century. We can see through a critical review of literature that all history of the location before that time has been forged later by the Catholic church as as a propaganda to create their own false history after they made the location as their center.
​

Normans occupied Sicily in the year 1061 and ended Muslim rule which had begun in the year 827. Muslims were fond of writing history wrote extensively about the locations of their time and events but they never came across any city or village called named Rome in Italy. Around that time 1037–1307 a great Muslim Empire called Seljuk Sultanate of Rume celebrated its inheritance of pre-Islamic Romans by using crescent moon and star symbol and Alexander the Great who is praised in the Qur'an using his Arabic name, Dhul-Qarnayn. Sultanate of Rume the largest empire of the time spread from Greece to China.

Mainstream Academia Always Presents Vatican's Propaganda As Established Fact As It Has Been An Evidently Proven Fact Whenever It Has Been Challenged.

The story that a Pope of catholic church  was given vast land as a free Donation by the Roman Emperor Constantine  has been known as a famous fabrication. After the exposure of the lie the church required another forgery to keep the myth of its false land inheritance and rule alive. So a new false report appeared in literature as Donation of French king Pepin (754 CE). Although it has been repeatedly circulated by all those who have least concern for truth there were many brave truthers and whistle-blowers speaking to waken us on the falsehood of the claim.

France's greatest Enlightenment writer Voltaire, wrote that there was time in France when Catholic church propaganda was forced on people to be accepted as final fact. His description of the situation bears strong similarities with the today's official restriction on expressing doubts about the Jewish Holocaust stories. Voltaire then goes on and explains there are very serious questions in the mind of critical scholars "German lawyers" unanswered about the Church history stories specifically about Church ever having control over the lands or possibility of French King ever allowing Church to exert its control over them. Voltaire, explains it can't be true in these words: 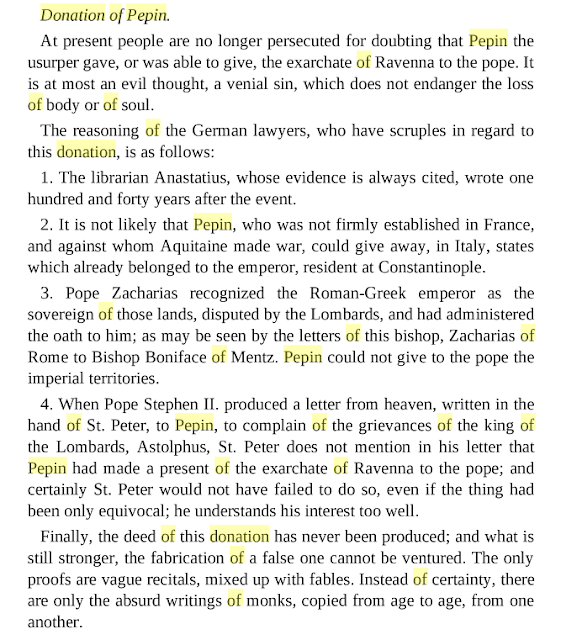 See entry "Donation of Pepin" in "Voltaire's Complete Essays- A Philosophical Dictionary, Voltaire's Romances, Voltaire's Philosophical Dictionary, History of Peter the Great, Emperor of Russia, Socrates Letters on England, Zadig, Micromegas, Candide", by Voltaire, Pandaowa Publishing
Sicily was under Arab rule from 827 to 1061, a period of enlightenment whose cultural, social and economic reforms had a profound and long-lasting influence that is still felt in many ways in the area today.  Muslim civilization scholars recorded events of the time and parties they dealt with, including Arab Nasara Trinity who originally came from Arabian Najran on their shoulders and later became the loyal supporters of Normans. They had to negotiate and battle with the loyalists, vessels and troops of Constantinople, they called Rome. However they never encountered any Catholic Christians or any organization or Pope or any party at some location named "Rome".
History of a place named, Rome, appeared in Italy after Normans of Sicily rule vanished. No center of any human activity, industry of significant magnitude is attested at any time in the past on that location through any primary evidence in archaeology or otherwise.

The paucity of pottery, an essential evidence for generations of populations living in some minimum state of civilization, has been portrayed an exceptional circumstance for the fictitious "Rome" to circumvent the basic archaeological principles.
"It is organized around a flow model for the life cycle of Roman pottery that includes a set of eight distinct practices: manufacture, distribution, prime use, reuse, maintenance, recycling, discard, reclamation."
Roman Pottery in the Archaeological Record, J. Theodore Peña, Cambridge University Press, Apr 30, 2007

Most interesting is the report that pope Pius IX said during that time:

"They dispute me this grain of sand under my feet," he exclaimed ;"they will not dislodge me
from it. This corner of the earth is mine ; I received it from Christ ; to Him alone will I render it again."


How Academia Treacherously Push Back The Destruction, Burial and Disappearance of Pompeii one and half millennia, 1500 years, Backwards

Much of what is described about everyday life in the ancient Rome and Roman Empire comes from the City of Pompeii. Romans are described with summer homes in Pompeii and would live there during the hot summer months.

The video below by Andreas Tschurilow shows the clear evidence that the famous Pompeii, being excavated by the archeologists in the last 200 years, in fact finally disappeared off the face of the earth as a result of the eruption of Vesuvius in 1631 i.e aboy 1500 years after the time mainstream academia assocaite with the end of Pompeii.

Why archeologists don't look at the evidence of Pompeii, Italy, continued as living city till it was
buried under the Vesuvius 1631 AD eruption ashes & correct the standard for radiocarbon-14
dating from incorrect 79AD to the correct 1631AD? 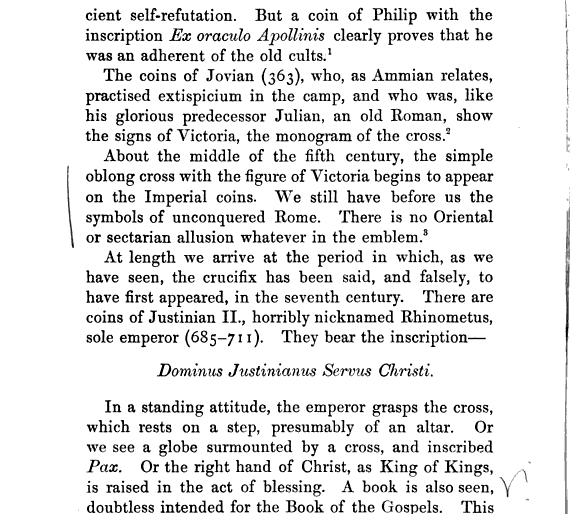 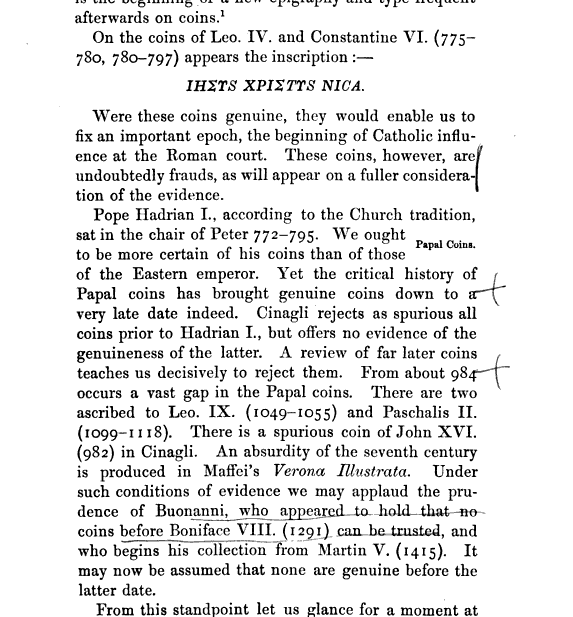 The Rise of Christendom, Edwin Johnson, Kegan Paul, Trench, Trübner, & Company, Limited, 1890, pages 47-49
_____________
One can see an example of top celebrated western Academic personality discussing history of Rome in a publication, which has been well circulated, in the most foolish manner imagined:
Was Rome a twin-town? By Rendel Harris 1852-1941, Published: Cambridge, W. Heffer & sons, ltd., 1927. The author uses two first names James & Rendel, when he uses James the name Rendel becomes middle name.


Back in the Times of Antiquity No Roads Lead To Rome Except in Church Forgeries & Indoctrinated Minds
"Whereas most bioarchaeologists who do isotope analysis can be pretty sure their local population was eating, drinking, and living locally, it's impossible to start from that assumption in Rome,.."

Church of Rome is a creation of Shia Ismaili/Fatimid who patranized Arab cross bearing  Trinitarians of Najran known as Melkite transliteration of the Arabic مَلَكِيَّة  ( meaning king's loyalists ). Ismaili/Fatimid help them organized in Egypt to benefit from their support to maintain their rule in egypt against Sunni population.  Ismaili/Fatimid under a patriarch leader, later termed Pope.  Ismaili/Fatimid took them to Sicily during their campaign against Sunni imaraat of Sicily. After Normans became rulers of Sicily Melkites provided them main support to run the Arab courts and public offices and also for intelligence against rampant muslim uprisings.

"Caliph Abū Mansūr al-‘Azīz bil-Lāh, had two consorts. One was an umm al-walad who is only known by the title as-Sayyidah al-‘Azīziyyah oral-‘Azīzah (d. 385/995).[8] She was a Melkite Christian whose two brothers were appointed patriarchs of the Melkite Church by Caliph al-‘Azīz.[8] Different sources say either one of her brothers or her father was sent by al-‘Azīz as an ambassador to Sicily.[8]"
http://self.gutenberg.org/articles/al-hakim_bi-amr_allah

Melkite Church, institution of Pope of Rome, is almost a copy of the shia imamia ( imam is believed to be a leader with divine rights) institutions. Sunni on the other hand believe that after Mohammad the leaders are like all others and must consult for all matters and no one can claim to be divinely authorized. 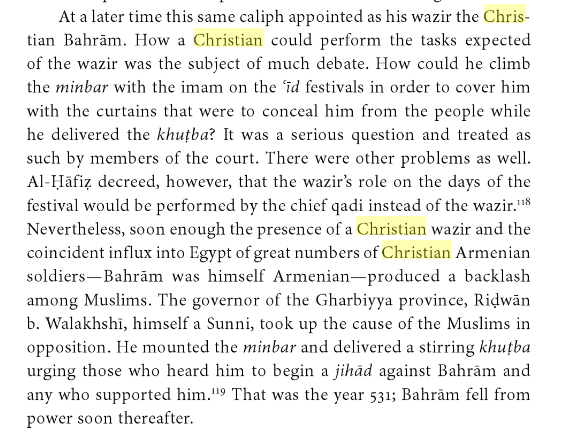 
Hijacking of Alexander The Great of Islamic Heritage 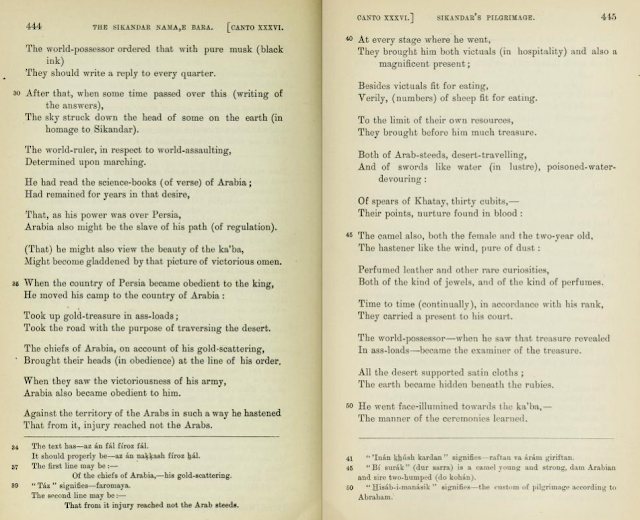 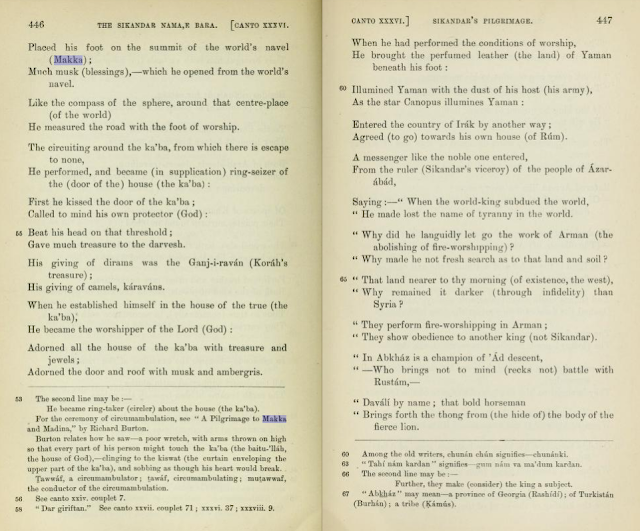 False History Used by Fascist Mussolini To Funnel US$ 85 Million Italian State Money To Vatican
Benito Mussolini came to power; in 1929 and a illegal treaty or Concordant was enacted between the Italian government and the church that exploited false forged history to funnel Italian State money to Vatican. Treaty was a blatant fraud to please Church for buying it to serve fascist Mussolini for public mind control. It formally recognized the sovereignty of  an entity, Vatican, as a state which has nothing in common with any state at present or any state that has ever existed in history, Treaty officially declared Roman Catholicism the state religion, nominally called for the papacy to remain neutral in international affairs, a dubious illogical point shown as favor to fool Italians, and made financial compensation for claims arising from the assumed confiscation of papal lands that was never legally acquired/possessed by the Church. .http://www.voxfux.com/features/vaticanmurder.html

Everything of the agreement was a lie, except the transfer of money, can be evidenced
from the fact that almost all countries in the wold recognize Vatican as a state that in fact enjoys more privileges than accorded to real constitutional states. On top of that many states, like Iraq and Afghanistan, have been invaded, their populations murdered in genocides with clear evidences of Vatican's involvement in the planning, execution and motivational support of the perpetrators.
http://www.concordatwatch.eu/topic-47307.834


Recently Prof. David Reich, the renowned geneticist published his scientific work which shows that dispersal of man and technolody all took place from area around Anatolia to west in Europe i.e complete absence of or extreme insignificance of thhe area around Rome, Italy in history. This evidence amlost kills Jesuits, Humanities, fraud history of Rome Italy. Reich has pioneered techniques to study ancient DNA to trace ancient human migrations. His work has revealed how population mixtures shaped modern humans and illuminated disease risk factors across populations.


Mainstream academia enjoys public funds but works for Vatican's Jesuit mafia: They have been acting collectively as termites of  factual human literary heritage.